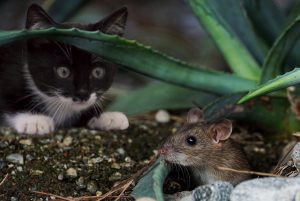 Have you ever wondered why you don’t see a mouse-flavored cat food sitting on the shelf in a pet store? Pet parents who want a diet that is as close as possible to what their cat would eat in the wild may may find the omission to be baffling. Let’s dig a little deeper to find out what’s going on here.

Pet food has to be appetizing, but to whom?

One common explanation as to why you don’t see mouse meat on the menu has to do with who buys it. Pet food labels and ingredient lists are meant to be attractive to the consumer, which why you may see ingredients that cats wouldn’t eat in the wild but sound tasty to us, such as kale and cranberries. It is believed that human consumers would find the idea of feeding their cat dead mice unappetizing, so it’s not an avenue that’s often explored in product development.

Where do pet food ingredients come from?

For commercial pet food manufacturers, the cost of the ingredients in their cat food formulas is a major consideration. While poultry, beef, fish, and even venison are raised and processed for human consumption, mice are not. Some premium pet food manufacturers may use rabbits, but they are also a food source for humans, and therefore are more readily available to manufacturers. Mouse meat may be such a rare protein that it simply isn’t worth making cat food recipes that revolve around it.

How do regulations factor into the equation?

Mice as a food source aren’t approved by the Department of Agriculture, either. Shaun Belongie, the national brand manager for Friskies, explained to Mental Floss that the FDA “holds pet food to the same sanitation and safety standards as it does human food, approving ingredients it deems appropriate, and necessary, for an animal’s diet.”

Moreover, most of the cat food that you would find on the shelves of the pet store are formulated to meet the standards of the Association of American Feed Control Officials (AAFCO). The AAFCO is a non-governmental organization made up of state and federal officials that set the guidelines for the nutritional value of pet food. While AAFCO itself does not enforce any regulations, many states require that commercial pet foods pass their standards.

But if you search hard enough…

If you’re really determined to find mouse meat for your cat, you may have considered that mice are raised for use in labs and as food for pet snakes. They have to come from somewhere, right? It turns out that mice are actually in very high demand. When it is in stock, you can buy ground and whole-prey mouse meat from specialty farms such as Hare Today, along with over novel proteins such as bison, alpaca, and guinea pigs!

It does come with a warning that the freezing and grinding process removes some of the nutrients, and it does not meet AAFCO standards. Another word of caution for vegetarians and the squeamish: it can be a little unsettling to see what your cat’s food looks like before it’s been processed. I’ll leave it at that.

photo by suju on pixabay

How to find hidden cat pee
How often should your pet sitter visit each day?