Welcome back! Last week on the blog, we took a look at cat coat patterns, and the week before, we explored colors. This week, we’ll discover how patterns and color combine to give you the unique feline friend that you know and love today. It’s all thanks to a symphony of genes working behind the scenes.

Each cat inherits two sets of genes from its parents. Some genes can override others. A dominant trait of a certain gene (signified with a capital letter) only needs to have one copy to be expressed, whereas a recessive trait (written in lowercase) needs two copies. Sometimes, a dominant gene will override a completely different gene, too, as seen below. 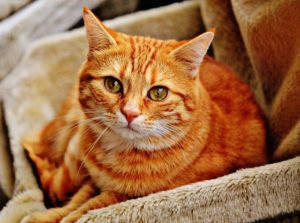 An orange tabby. Photo by Alexas_Fotos on Pixabay.

The dense versus dilute color gene, “D” will determine whether or not the cat will have a rich, pronounced color, like red, or a pastel version of it, such as cream. Dense colors are dominant over dilute colors. According to Wikipedia, “The Dense pigment gene, D/d, codes for melanophilin, a protein involved in the transportation and deposition of pigment into a growing hair.” 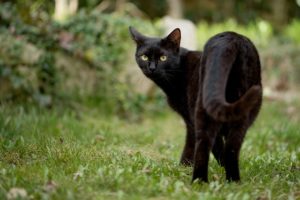 A black cat. Photo by suetot on Pixabay.

The black versus non-black gene, “B,” controls the production of the pigment eumelanin. Black fur is the dominant trait, and recessive traits result in chocolate or cinnamon. 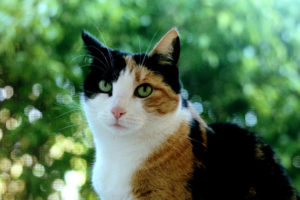 A calico cat. Photo by Erica Zabowski on Flickr.

The orange versus non-orange gene, “O,” is interesting because it will cover up any other gene. Therefore, if the cat inherits a dominant O gene, it will override the black color trait that comes from the B gene. The O gene produces the red pigment phaeomelanin instead of the black pigment eumelanin.

The O gene is also sex-linked, because it appears on the X chromosome. Males only have one X, so they can only be either orange or non-orange. However, females have two X’s, so depending on which X chromosome is active in a particular spot, they can be orange, non-orange, or a combination of both as seen in tortoiseshells and calicos, 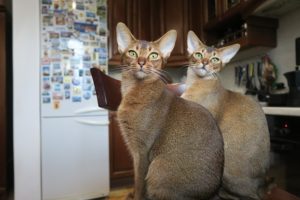 The agouti versus non-agouti gene, “A,” is what results in a ticked coat. The dominant trait here is the striped shaft of fur, whereas the recessive trait is a solid color. The agouti gene is named after the animal with the same name. 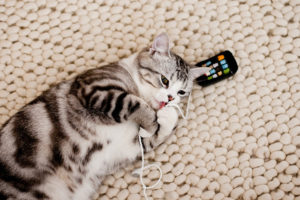 A classic tabby cat. Photo by Tom Thai on Flickr.

The tabby versus non-tabby gene, “T,” controls what kind of tabby will be produced. The dominant traits here can produce a mackerel tabby or all-agouti tabby such as an Abyssinian, but the recessive trait creates a classic tabby. 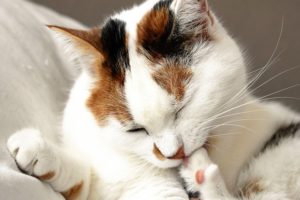 A red and black calico. Photo by Pitsch on Pixabay.

The spots versus no spots gene, which is known as “S” or “KIT,” creates white fur in cats. The spots of color become islands in the sea of their white coats. A cat with a solid white coat can actually be a cat with one giant white spot. The dominant trait is to be spotted, whereas the recessive trait is non-spotted. 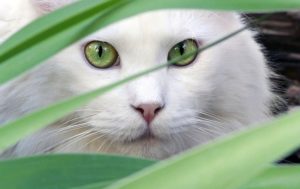 A white cat with green eyes. Photo by ibjennyjenny on Pixabay.

The white versus non-white gene, “W,” is a lot like the orange O gene in that the dominant trait will override any other gene, making the cat completely white. The recessive trait allows all of the other genes to express themselves.

Interestingly enough, a cat with white fur and blue eyes is likely to be deaf, which is thought to be a result of insufficient melanoblast stem cells. These cells later develop into not only pigment-producing cells, but also neurological cells. Kittens also have blue eyes at birth which change color as their eyes develop with age.

White spots also develop in many other domestic animals. Darwin’s theory of “domestication syndrome,” which includes white spots, floppy ears, short muzzles, and friendlier animals, may have something to do with neural crest stem cells and how they develop. 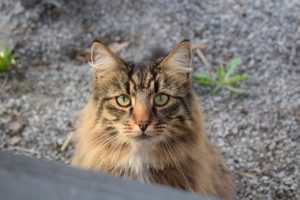 A Norwegian Forest Cat. Photo by JennyJohansson on Pixabay.

The long fur or short fur gene, “L,” will produce longhair or shorthair cats. The dominant trait creates short hair, and the recessive one creates long hair. For cats that grow long hair, the period of growth for hair lasts longer due to the recessive trait.

We’re just scratching the surface! There are more genes and combinations than we have space to go here. If you want to delve a little deeper, this Wikipedia article and this coat color and pattern chart break it all down for you.

We hope that you enjoyed our three-part series on what factors determine the appearance of a cat’s coat! Did you know that this series, and many of the other topics covered on the blog are written in response to our client’s questions?

If there’s something you’ve always wanted to know about cats, feel free to drop us a comment below, or write to us on Facebook. Be sure to check back on the blog next week for more cat facts!

What determines the appearance of a cat’s coat? Part Two – Patterns
Is a rotation diet right for your cat?