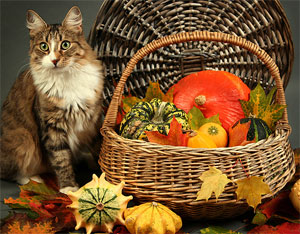 Are you having Thanksgiving dinner at your place this year? If so, there are some things you need to know about Thanksgiving food and cats. While they aren’t normally the beggars dogs are, most cats will take advantage of an opportunity to chow down. So it’s best to know what is and is not good for them.

Turkey: Yes. This staple of Thanksgiving happens to be completely edible and delicious for felines. Skinless white meat is most benign, but most cats can handle dark meat or a bit of skin and giblets as well. I remember as a child my father would give a hearty helping of skin, fat, and giblets to the cat every Thanksgiving. I was worried that it could cause heart disease in the cat. I had not yet learned that fat and cholesterol do not contribute significantly to heart disease in cats, and possibly not in humans either. However, the fattier parts of the turkey are more likely to cause upset stomach, so go easy.

Gravy: The cat I mentioned above suffered no adverse consequences from his gravy lapping. However, remember that gravy is fatty and salty. Moderation is key, and the salt could cause problems for cats with pre-existing heart conditions.

Mashed potatoes: I like to make my mashed potatoes with lots of garlic, onion, shallots, half-and-half, and butter. It turns out that garlic, onions, and shallots can cause Heinz body anemia in cats. And many cats are lactose intolerant, so the half-and-half could be a problem. However, garlic isn’t cyanide and half-and-half isn’t acetaminophen (which is massively toxic to cats). Most cats could survive a bite or two of my potatoes. And they certainly could tolerate milder, less rich mixtures. But I wouldn’t recommend serving up mashed potatoes to your cat.

Read more about Thanksgiving dinner and your cat at Catster. 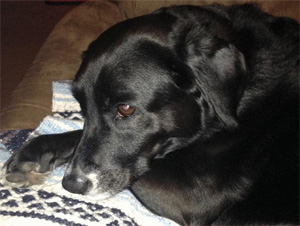 There has been a lot of talk recently about a fairly new virus called circovirus. Although it is not widespread, dog owners should be aware of it.

From Speaking for Spot:

Some angst is brewing amongst dog lovers because of a newly discovered infectious agent called canine circovirus. This angst is justified as circovirus is suspected to be the cause of recent severe illness and even death in some dogs.

Circovirus have been around for a long time, but documentation of this microorganism in dogs is new. Pig farmers are all too familiar with circovirus which causes poor growth, a “wasting away” syndrome, and death in piglets. Circovirus can also cause disease in a variety of bird species.

While the circovirus found in dogs resembles pig circovirus, they are not identical. This canine version was first discovered in June, 2012. At that time it was not determined to be a cause of disease, simply an incidental finding in healthy dogs.

In April, 2013 circovirus was first reported as a possible cause of illness in dogs by researchers in California. Most recently, circovirus was found in the feces of a number of sick dogs in Ohio. These dogs had severe vomiting, bloody diarrhea, and lethargy. Some of these dogs passed away in spite of aggressive therapy.

Although circovirus has been isolated from apparently healthy dogs, the consensus now is that this virus is very likely a “player” in the severe gastrointestinal illnesses reported in California and Ohio. Whether the symptoms these dogs exhibited were due solely to the circovirus or the virus acting in conjunction with another microorganism is unknown. 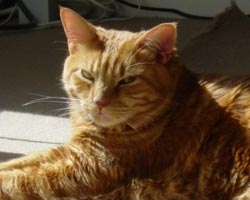 Are you concerned that your cat has put on some extra pounds and wish to get her to exercise? Unable to do so? A treadmill may not be an option for your cat, but there certainly are ways to keep your cat slim and healthy. Here are some easy tips to ensure a good workout for your indoor cat:

Follow these few simple tips and you will have an happy, healthy cat.

This is a guest post by Christina Lyttle. She is a pet lover and is especially fond of cats and dogs.