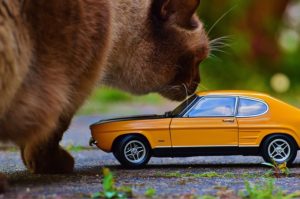 “Oh no! The giant Yule Cat has come for me!”

You may have heard of the Krampus, but have you heard of Iceland’s infamous Yule Cat? A creature with sharp teeth and glaring eyes, the Christmas Cat of Iceland is a fabled holiday monster. But who exactly is this ferocious creature and what makes him so scary?

The legend of the Yule Cat

Definitely not the cuddliest of kitties, legend has it that the Yule Cat prowl’s Iceland’s snowy countryside. The cat is said to devour those who don’t have warm clothing to wear for the winter. As a result, it is a tradition in Iceland for family members to gift each other new clothes for Christmas. According to some, the Yule Cat is the pet of another Icelandic creature, the giantess Gryla, who is said to kidnap, cook, and eat children who misbehave. Gryla’s sons, the Yule Lads are quite mischievous themselves — licking pots and slamming doors. How rude.

Like most monsters, the Yule Cat is more fiction than fact. The story of the Yule Cat originally came from farmers. They told the tale as an incentive for their workers to finish processing the autumn wool before Christmas. It was said that those who worked hard and finished the job on time would be rewarded with new clothes, while those who failed would face punishment from the Yule Cat.

History of the Yule Cat

Iceland’s Christmas Cat is regarded as an ancient tale, but evidence shows that the earliest written accounts of the creature date back no further than the 19th century. It later became popular through the Icelandic poet, Johannes ur Kotlum, whose epic poem describes the cat’s terrifying features.

Are you thinking of buying some cute outfits for your kitty now? Share photos of them with us on Instagram and Facebook! And if you’re going out of town for the holidays, don’t hesitate to schedule a sitter for days that you’re away.

photo by Alexa’s_Fotos on pixabay

Why does my cat lick my hair?
Celebrating Candace’s 100 Blog Posts!