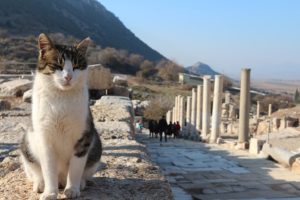 Where did the year go… As we prepare to say so-long to 2017, let’s take a look back at the cats who captured our attention the most.

Dexter was already 20 years old when he was adopted from a local shelter: that’s practically 100 in human years! Because of his age, Dexter’s new family assumed he would pass away soon. But this senior sweetheart lived on for another two years! Dexter bonded especially well with the family’s young son, receiving lots of cuddles and affection, and reminding us all that it’s never too late for love.

In Latin American culture, a quinceañera is an elaborate celebration thrown when a girl turns 15. For her birthday, Luna the cat was lucky enough to get her own! Luna’s family went all out with a party, food, balloons, cake, and even a special dress for Luna. Luna took it all in stride, and was especially happy to get her own can of birthday tuna. Believe it or not, Luna’s quinceañera was one of the most viral stories of 2017.

BenBen was a shelter cat just on the brink of being put down. Considered unadoptable, he suffered from a crushed spine, several lacerations, and facial injuries that left his face in a permanent frown. But hope came just in the nick of time! BenBen was adopted by a loving family, whose care and attention put him on the road to recovery. While BenBen still looks sad, he is truly a happy kitty now!

The Hurricane Harvey Cat is an image of defiance and grit! This cat was famously captured while paddling his way through flood waters, a snarl on his face and a glimmer in his eye. The viral image provided some much needed encouragement and humor after Houston’s devastating storm.

Last but not least, wrapping up this list on a positive note, is Bone Bone. Have you ever seen such a fluffy cat? With over 30K followers on Instagram, Bone Bone is a feline megastar. Bone bone lives in Thailand, where his owners love to take him out to the park and to meet fans, all while he wears his signature spiky backpack. What a cutie pie!

Psst! Don’t forget to book a pet sitter for your memorable cat. And with that I bid you cheers, and, if I don’t see you, a happy New Year!

photo by ArchaeologistDurmus on pixabay

One Response to The five most memorable cat stories of 2017