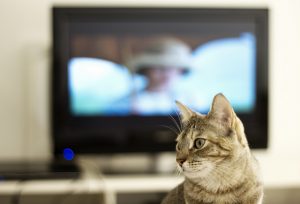 They say pets resemble their owners, and it seems to stand true for pet parents and kitties who love to watch TV together. Maybe your cat stares intently at the screen, pops up, or even swats at it! If you’ve ever wondered what’s going through your kitty’s mind, allow us to shed a little light on the situation.

It’s a common misconception that pets like cats and dogs are only attracted to the flashing lights on the TV. The truth is, your typical television isn’t displaying moving images at all! It’s actually redrawing still images at a rate fast enough that our brains will interpret the images to be moving, which is at least 60 Hz (cycles per second). Cats’ brains process visual information at about 55 Hz, so they do indeed see the same moving images that we do.

As it turns out, cats like to watch the same things on TV that they like to watch in real life In one study, shelter cats without access to outside windows were given television screens. The cats in the study responded the most to programs featuring their natural prey such as birds, rodents, and fish. Anecdotal evidence has also shown that cats can be attracted to quickly moving objects such as basketballs and soccer on television.

Is it safe for cats to watch TV?

According to Dr. Jillian Orlando, DVM, a veterinary behavior resident at the North Carolina State University College of Veterinary Medicine, sitting too close to the TV won’t hurt your cat’s eyes. However, she goes on to say, “If your cat is really intent on ‘hunting’ the television, don’t let her watch the TV unsupervised. And if you have a large flat screen, mount it to the wall, in case kitty decides to take the leap.”

What are some alternatives to leaving on the TV?

It’s also easy for your cat to become frustrated with prey that they cannot catch, such as laser lights and images on screens. Whenever possible, provide alternatives such as window perches and plenty of interactive toys to help relieve the tension. If you normally are very noisy while you’re home, leaving on a radio can also help your cat to feel less lonely without the risks of kitty toppling the TV.

Have you found that leaving the TV on while you’re out of town isn’t quite enough to keep your cat company? Nothing can compare to the warmth and love a pet sitter can provide while you’re away from home. Call to request a quote today!