The Guardian Cats of Tashiro Island 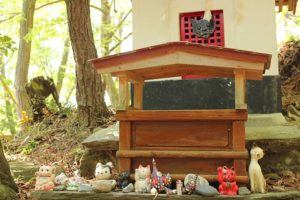 There are several “cat islands” around the world. They are islands where the feline residents outnumber the human ones. However, this is only one such island where the cats actually saved the humans’ lives.

This March marks eight years since the great earthquake and following tsunami rocked Japan. Tashiro Island, home to a small fishing village with only 50 elderly residents, was ravaged by the tsunami, too. However, the island is home to hundreds of cats. The villagers saw the cats running to higher grounds, and because their trust in the cats was so great, they fled to higher ground, too.

Before the earthquake the island was well known by cat lovers worldwide. The residents created an online fundraiser to request help rebuild the island in exchange for small gifts. Support poured in, and the villagers quickly made the repairs to restore the island to the functioning fishing and oyster cultivation site it had been for ages.

After the tsunami, the residents of the island looked upon the cats as good spirits and named them the Guardian Cats, but their reverence for their furry friends dates much further back than that. Fishermen have always looked to the cats to predict the weather. When they hide before a storm, the fishermen know that the sea will be rough.

The residents of Tashiro Island love their Guardian Cats so much that there is a shrine to them at the center of the island. Long ago, a fisherman accidentally injured and killed a cat with a rock. That cat was given a shrine. Since then, all of the cats who have passed on the island have been memorialized with figures there. Visitors draw cats on rocks and leave them at the shrine as a tribute.

Do you have a guardian cat of your own? Share a story with us in the comments, and be sure to tell your friendly pet sitter all about it. We love to swap stories about our feline friends.