Cats of the ice and snow

Are you excited for a little snow to fall tomorrow? Is your cat excited, too? Whether you have a purebred cat or a moggy, you might have a kitty who longs to be outdoors, fearlessly bounding over the blankets of snow. Check out these three winter-loving cat breeds who watch the downy flakes with particular interest.

Maine Coons are rightly nicknamed “the gentle giant” because they are the largest breed of domestic cat. Their origins aren’t well documented, but has been hypothesized that the Vikings brought with them longhaired landrace cats, which are cat breeds that develop naturally in an environment due to isolation from other species. Then, the cats were thought to have interbred with North American wildcats, lending them their strong build. They are highly native to Maine, which is reflected in the breed’s name. 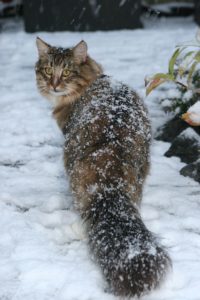 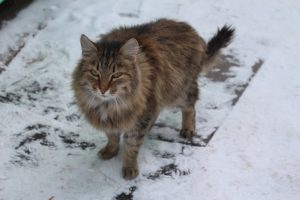 Simply known as the Siberian cat to most breeders, the Siberian Forest Cat is an ancient cat breed that is thought to be the ancestor of all longhair cat breeds. It is also a landrace breed that developed on its own over time. It’s rare to see them in the United States, though. Importing them from Europe, where they are more popular, can be a prohibitively long and expensive process.