How do cats keep their balance? 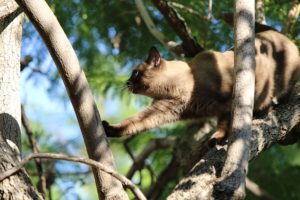 Have you ever noticed that your cat can balance on the thinnest of edges effortlessly? Meanwhile, we humans struggle to stay upright when the subway jerks us around at rush hour. Here’s a little insight into their feline grace.

The magic happens in the inner ear

Just like in human beings, a cat’s sense of balance comes from the inner ear. Kittens are able to identify which way is down from birth. However, according to Vetstreet, kittens are able to right themselves mid air at four to six weeks, and by ten to twelve weeks they are able to strut their stuff across a narrow plank.

That’s because they have long, flexible backs and no collar bones. Their claws also help them grasp branches. If they fall, cats point their faces down and the rest of their body whips around until all four paws are facing the ground.

The tail adds a counter balance

Much like tightrope walkers hold a horizontal pole and gymnasts extend their arms and legs to catch themselves before they fall off of a balance beam, cats also tip their tail to either side in order to stay on track. The tail isn’t required of all cats, however, as several bobtailed and tailless breeds are able to balance themselves just fine.

What about cats that fall over?

A fall here and there may be clumsiness, but if your cat falls repeatedly, there may be a medical condition to blame. One such condition is feline cerebellar hypoplasia. Cats with this disorder are sometimes referred to as “wobbly kitties” because they have trouble keeping their balance, but are otherwise capable of living long, healthy lives.

Feline vestibular disease can show up without warning and leave the same way. It is an illness of the inner ear that is often times idiopathic. Symptoms include head tilting, darting eye movements, and vomiting. Your vet may want to perform an MRI, x-ray, or blood tests to rule out more serious illnesses such as neurological disorders, infections, or cancer.

Photo by OmaW on Pixabay.