Does Santa Claus have a cat? 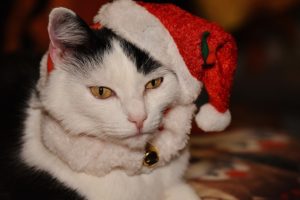 We sure hope that Santa Claus treated you well this year. You may have heard the reindeer on your roof, but did you also hear a meow or a roar? Well, it depends on who you ask! According to some stories, Santa Claus loves cats as much as we do!

The Life and Adventures of Santa Claus

In 1902, two years after publishing The Wonderful Wizard of Oz, Frank L. Baum wrote another classic, The Life and Adventures of Santa Claus. Replete with fantastical creatures and characters, Baum’s book chronicles Santa’s life, explaining how he came to deliver toys to children. In this wonderful saga, Santa has two very important cats in his life!

In Baum’s tale, Santa is found as a baby in an enchanted forest by a mystical woodsman, who places him in the care of a lioness named Shiegra. Shiegra watches over Santa and protects him from the other forest creatures until he gets adopted. Later as a boy, Santa is given a special pet cat named Blinkie, who has “soft and glossy” fur. In fact, it is Blinkie who serves as inspiration for Santa’s very first toy, a wooden cat that he carves and gives to a neighboring child.

Baum’s book has been adapted into a graphic novel, an anime series, and a handful of films, including a claymation favorite from 1985. Here Blinkie is imagined as a black cat with green eyes and a little blue bow. The film even has a whole musical number devoted to the toy that Santa creates from her likeness.