Why do cats puff their tails? 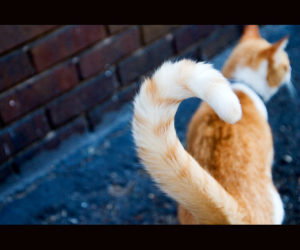 It’s that time of year again. Fall is here and the stores are brimming with spooky masks, witches on brooms, and silhouettes of black cats perched on fences with arched backs against an orange sky. If your home has a happy kitty, you may not have seen your feline friend bare his or her fangs so fiercely, but you’ve likely seen your kitty make a puffed tail pose for other reasons. Let’s explore why it happens.

When your cat’s tail fluffs up and doubles its size, it’s experiencing a phenomenon known as piloerection. Tiny muscles in the skin at the base of hair follicles contract and make the hair appear to be standing on end. When it happens in humans, we refer to it as getting goosebumps.

Just like in humans, this reaction is involuntary and can be brought on for many reasons, both physical and psychological. Have you ever been so excited that you’ve gotten goosebumps? The same can happen in felines at play, causing them to get puffy tails that curl like question marks. A very giddy cat may even shake his or her tail like a rattle, which is a lot like giggling.

Moments of anger and fear

Just as a bear rears up on its hind legs to make itself seem larger, cats puff out their tails and arch their backs when they’re frightened in an effort to make themselves seem bigger than they are. Coupled with an ear splitting screech, this display can startle an intruder long enough for kitty to make a quick escape. Likewise, a cat who is severely agitated will often give a warning by making him or herself seem larger. You may also notice a ridge of fur standing up like a razor along the spine.

Whether your cat “laughs” along with you with a fluffy, quivering tail or surprises you with a big poofy warning, be sure to discuss it with your pet sitter! Our sitters are always mindful of your cat’s emotional state. Drop us a line today!