Why does my cat drop toys in the food or water bowl? 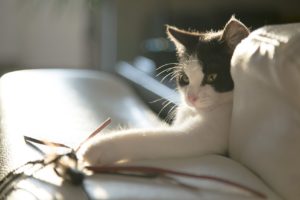 Many cat parents have come home to find the kitty’s favorite toy piled on top of the food dish or “drowned” in the water bowl. While it’s a fairly common behavior, scientists and cat behaviorists are just as baffled as the rest of us as to why cats place their toys in their food or water dishes. Here are a few theories.

A safe place to store leftovers

The domestic cat’s wild relatives such as leopards, bobcats, and wildcats have been known to store their food in a safe location, known as a cache. Since your typical indoor housecat doesn’t often have freshly caught prey leftover to eat for later, the closest substitute may just be a favorite toy. The closest thing kitty has to a safe location in their territory would be the food and water dishes in your home.

However, this caching behavior is not the same as burying food that has been partially consumed. A cat who buries food does not intend to come back to it later.

A gift from kitty to you

Another possible explanation has roots in the relationship between a queen and her kittens. When mama goes out to hunt for food, she’ll often bring back a her prey to show her offspring how to finish off and consume it. If kitty is bringing you her conquered toys (or even leaving you dead mice or birds) your cat may be expressing that she cares for you and wants you to eat well. After all, feeding someone a universal act of love that you show your cat every day.

Speaking of kittens, mama cats will also sometimes bring kittens who have wandered off back to their litter and nest. So it could also be that your cat regards scattered toys as her naughty little children who’ve wandered off again.

Last but not least, if you’re finding toys in the water dish specifically, it could just be the result of a rousing play session. Cats love fresh, running water not only for drinking, but also at entertainment! Some cats will sit and stare at a fountain or running water, and others may go a step further and dip in their paws to watch the ripples. So when it comes to “drowning” toys, it could be that kitties are combining two of their favorite things.

Does your cat have any weird quirks? Your pet sitter wants to hear about it! These funny variances in your cats’ behaviors is what makes them unique, and we love getting to know your kitties for who they are, quirks and all.

photo by milivanily on pixabay