How to keep your cat from unraveling toilet paper 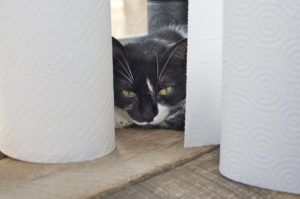 Because cats are the silly little creatures that they are, we’ve written quite a bit on the blog about the various bathroom behaviors of cats. Yet, perhaps one of the most adorable and diabolical thing kitty can do is sneak into the bathroom and unwind the music roll! Here are a few tricks you can try to discourage your cat from unraveling the toilet paper.

Believe it or not, when the toilet paper roll was first invented, it was intended to be hung with the leading edge facing the user. On the one hand, since kitties tend to pull the paper down toward themselves, hanging the roll with the leading edge against the wall would stop it from coming completely undone. On the other hand, if your kitty just enjoys spinning the roll, it might not be enough to stop him or her from completely shedding the paper in the process.

Change the type of dispenser

As the old adage says, “If you can’t change the behavior, change the environment!” Your toilet paper troubles could just be a quick equipment change away from total relief. For instance, did you know that they make toilet tissues that pops up much like facial tissues? If you don’t like the industrial feel, but like the idea of pop up toilet paper, you could try this canister by OXO that pops up an entire roll like a cool gadget in a spy movie!

Unfortunately it’s been out of stock everywhere for a while, but if you’re crafty, you can probably hack the mundane version with a spring. Or, you know, use it without the pop up feature at all. It’s still quite effective armor for your coveted toilet paper trove. Speaking of armor, some wall mounted dispensers have a cat deflecting shield (also known as a cover).

Or change the orientation

If you feel like don’t need to go to such extremes as buying a suit if armor for your TP, simply turning the roll vertically instead of horizontally may be enough to deter your kitty. This cast iron stretching cat toilet paper holder is a bit of a splurge, but it would make a great gift for a cat lover! Good news, they also have one for dog lovers, giraffe lovers, and dinosaur lovers, too! (But who doesn’t love dinosaurs?)

Last but not least, if your cat is particularly cunning, you might just have to put the toilet paper completely away. You could keep it in the cabinet under the sink. For the cabinet-opening variety of cat, try using child proof cabinet locks, or just close the bathroom door to keep kitty out all together.

Do you have a room in your home that your cat isn’t allowed to go in? Don’t forget to let your pet sitter know!