Why do cats wiggle before they pounce? 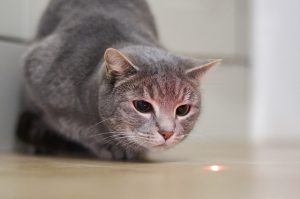 It’s a familiar sight – your kitty hunches low to the ground. Her eyes open wide. She gives her tushy a little shake-shake-shake, and then she springs into action! It’s a wonderfully adorable and terribly effective way to ambush prey, but have you ever wondered why exactly cats shake their booties before they leap?

If you stop to think about it, you might notice that many human athletes exhibit a similar behavior as a warm up. Baseball players swing their bat a few times before the pitch, runners do quick drills on the starting line. It’s the same for cats. That adorable butt wiggle is partly a way for cats to loosen up their muscles and practice before the big moment. After all, careful preparation could mean life or death when there’s only one shot to catch a meal.

In order to land just perfectly, cats have several biological mechanisms in place to help them accurately judge distance. One such evolutionary advantage is their vertical slit pupil eyes, but another is, you guessed it, the wiggle! By testing the ground beneath their paws and building up tension in their muscles, they are better able to gauge exactly how high and how far they could jump. You might see a similar behavior to the wiggle before your cat jumps onto a high shelf, for instance, in which they appear to bob up and down while they evaluate their jump.