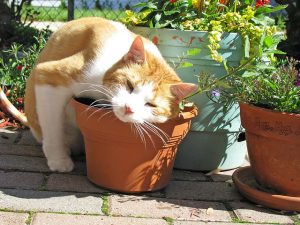 Some cats just can’t seem to get enough of that member of the mint family known as catnip! You might be surprised that cats of every stripe, including lions, tigers, and bobcats, react to it, too! But have you ever wondered what it is about catnip that kitties seem to love?

It all boils down to the plant’s chemistry. An essential oil called nepetalactone is thought to stimulate the receptors for euphoria in kitties’ brains. Not just for felines, nepetalactone has been grown as a medicinal herb for humans as well. When made into a tea, catnip can have a calming effect similar to chamomile tea. Concentrated nepetalactone can also repel mosquitoes!

What is its effect on cats?

Some cats react in a very big way! It’s not uncommon to see your cat roll around in it, become hyperactive, or even mellow out. Some cats can get aggressive once they get a whiff of catnip. Once it’s eaten, however, catnip appears to calm and mellow effect on cats. The euphoric reaction to catnip last about ten minutes, and then cats may not respond to it again for about two hours.

Why don’t all cats care for it?

Even though the reaction to catnip can be seen across all cat species, only about 50 percent of cats inherit the gene that makes them sensitive to it. Young kittens of about 3 to 6 months of age also won’t have a response to it. Since the potency of catnip can be lost overtime, it’s best to either grow your own or keep dried catnip in a tightly sealed container for the best effect.

Does your cat go crazy for catnip? We’d love to see it! Share a video with us on Instagram!