How to encourage your cat to use a scratching post 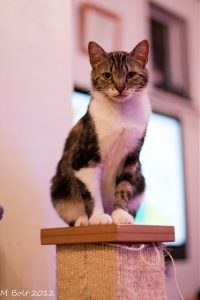 If your cat has been scratching your couch or mattress, place several posts around each corner where your kitty scratches. You should avoid placing the posts in unappetizing or lonely areas such as by the litter box or in the basement. Cats often scratch when they first wake up, so try placing a post next to their sleeping area. Better yet, opt for a cat condo with boxes for napping and sisal scratching posts built in.

Cats need to scratch to stretch their muscles and shed the damaged outer layer of their claws, so discouraging your cat from scratching can be traumatic for them. Not to mention, cats respond better to positive reinforcement than negative reinforcement such as yelling. Positive reinforcement includes rewards like petting, speaking soothing words (“That’s a good kitty!”) and providing treats or catnip. Once your cat begins to use the scratcher, offer rewards as encouragement.

In some rare cases, your cat may persist to scratch your furniture because they are amused by your reaction to it. If you’re used to yelling or freaking out at the sight of your cat scratching your couch, switch to a neutral response instead. Then, you can proceed with placing your cat by the new scratcher and using the positive reinforcement methods mentioned above.

However, one of the strongest deterrents for a cat is an unappealing environment. There are various anti-scratching aids available that can make your furniture less appealing than the scratcher, thus making the switch easier for your cat.

Once your cat has picked up the good habit of using a scratching post, don’t throw it away after it gets worn out. Now that post is great for really digging in deep and is covered in familiar and happy scents. Opt to buy an additional one instead.

Are you worried that your cat might scratch up your furniture while you’re on vacation? Schedule a visit from one of our pet sitters who can keep an eye on your kitty while you’re away.