Why does my cat drool while purring? 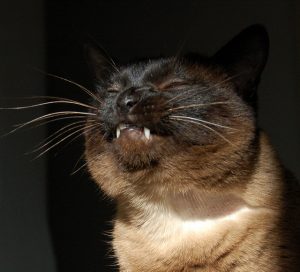 Have you ever wondered why your cat drools when he or she is happy? There are a number of possibilities. Some are benign, and some need medical attention. Here are a few explanations.

A remnant from happier times

Dr. John Bradshaw gained a lot of attention across the web when he suggested in his book, Cat Sense: How the New Feline Science Can Make You a Better Friend to Your Pet, that cats essentially see their pet parents as big, friendly mama cats. He told the International Science Times in an email interview that “The most likely explanation for their behaviour towards us is that they think of us as part mother substitute, part superior cat.”

Indeed, affectionate behaviors such as kneading and even meowing for food have been linked to actions performed by a kitten for its mom. Franny Syufy of the Spruce then postulates, “It occurs to me that kittens salivate when they are nursing, and they salivate in anticipation of it. Wouldn’t it then be normal for [a cat] to salivate when he is being held and petted by his surrogate mother, as the experience sends his memory back to those blissful days with his feline mother?”

Some cats are just “happy droolers”

In general, scientists don’t have a consensus on why this phenomenon occurs, though. According to Dr. Patty Khuly VMD of VetStreet, “It seems that a small but significant percentage of cats drool in response to positive stimulation, which is typically also accompanied by purring, rolling over submissively or rubbing their faces against the objects of their adoration.” She goes on to write that these kitties are lifelong “happy droolers.”

Some cats are not

However, that doesn’t mean you shouldn’t rule out other potentially dangerous medical causes for excessive drooling. Purring isn’t always a happy signal, as some cats purr as a self soothing behavior in response to an illness or injury. Foreign objects lodged in the mouth, ingestion of a toxic plant, kidney disease, feline oral squamous cell carcinoma, and a number of other illnesses can also cause your cat to drool. When in doubt, don’t hesitate to bring your cat to the vet!

Are you planning a big trip? Book one of our pet sitters and rest at ease. We provide photos and updates on your kitty’s health and happiness levels — drool and all!