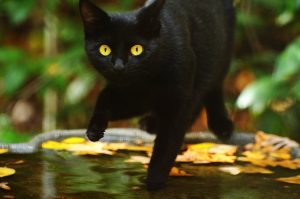 Tell us if you’ve heard this one: it’s bad luck for a black cat to cross your path. It’s a common superstition! Because of it, black cats have developed a bit of a poor reputation and are considered unlucky in general. But whether or not you believe black cats are bad luck, you might be wondering how this notion got started in the first place.

The association of black cats with bad luck can be traced back centuries. In 1233 AD, Pope Gregory the IX declared black cats to be an incarnation of the devil. Many citizens started to purposely harm black cats because of his conviction. In time, black cats were associated with witches. In Puritan New England, black cats were believed to be witches’ accomplices or witches in disguise. Though our belief in witches has since dwindled, the black cats’ negative connotations have remained.

Black cats in other cultures

While black cats don’t have a great rap in the US, in other cultures they are thought to be quite auspicious. Japan considers black cats to be good luck, as do certain parts of England. In Scotland, it is said that a black cat arriving at your house brings prosperity. In Ancient Egypt, black cats were treated like royalty. And throughout history, sailors have believed that keeping a black cat on board a ship keeps misfortune away.

Unfortunately, the black cat’s reputation has adversely affected their chances for adoption. Studies have shown that it takes longer for black cats to get adopted from shelters than any other cats. While there is no proof that it’s because of superstition, it’s hard not to discount the possibility of bias.

Some shelters have to take black cats off of display on Halloween due to disproportionate demand for them. To help combat the negative stigma, the US has Black Cat Appreciation Day, a day meant to celebrate black cats and encourage their adoption.

Do you have a special little black kitty of your own? We’d love to see pictures of them! Find us on Facebook and Instagram!