Independently owned stores and businesses are some of the greatest sources of character and variety in New York City. They often offer unique selections as well as warm, knowledgeable store clerks. Just ask the following five feline shopkeepers just how personable their staff can be.

The Cats of Park Slope Copy

The twin brother and sister gray and white tabbies at Park Slope Copy go by many names, but most customers know them as The Copy Cats. These little pranksters adore shoulder-rides and laying out on the scanner beds to surprise guests with photocopies of their bellies.

Tiny the Usurper, at The Community Bookstore

The legend of Tiny the Usurper begins when neighborhood kids in Park Slope left a box full of kittens in front of The Community Bookstore. One by one, his littermates were adopted, but Tiny remained. 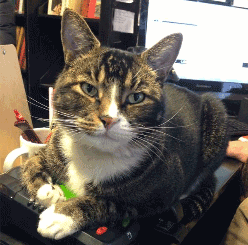 Hampton, at The Corner Bookstore

Meanwhile in the Upper East Side, this literary kitty is a little harder to find. Named after the area where he was rescued, Hampton indulges in the finer side of life by lounging in the travel section by the antique cash register when he isn’t hiding from his adoring fans.

Molly the Cat, at Myers of Keswick

Myers of Keswick in the West Village is a well known traditional British grocery store.  However, Molly herself is known for her harrowing story that was broadcast around the globe when her owner discovered the poor girl stuck beside her store’s building for 12 days. 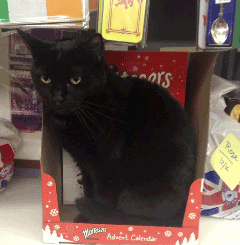 Once one of two cats, Keetah has seen some significant changes in the West Village. In 2013, her record store was forced from its location of 20 years when her owner could no longer afford the astronomical rent. Keetah’s story isn’t all sadness, though, as now the orange and white tabby, Schultz, keeps her company. Tardar Sauce the Grumpy Cat and Oskar the Blind Cat even visited her on tour.

So keep your eyes peeled, because you never know when a new cat may show up at your local independently owned stores.  And if you know of any NYC store cats that we missed, we’d love to hear about them in the comments.

Candace Elise Hoes is a pet sitter and blogger at Katie’s Kitty. She is a graduate of the MFA Writing Program at California College of the Arts.