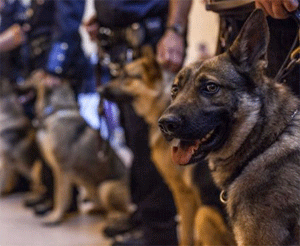 The newest German shepherd graduates of the Metropolitan Transportation Authority have been named after New York fallen heroes.

The largest class of bomb-sniffing anti-terrorist German shepherds trained to work for the MTA graduated Friday.

Each of the 19 dogs, who bear the names of New York’s fallen heroes, received a badge with a collar and full color guard honors at the Metropolitan Transportation Authority ceremony at Grand Central Terminal.

The dogs and their handlers from the MTA police and sister agencies including the NYPD were honored for their “extensive 12-week training program for bomb detection that will protect our lives,” said Joseph Giulietti, president of Metro-North Railroad at the ceremony.

The dogs will patrol trains and station platforms of the Long Island Rail Road, subways and Metro-North.

Also attending the ceremony were families whose relatives died in the line of duty both as first responders and members of the armed forces. “I think this is a great honor because these dogs are protecting the city we love,” said Theresa Sack of St. James, whose husband, FDNY Safety Battalion Chief Lawrence T. Stack, 58, died on 9/11 when the North Tower collapsed while he was trying to save a man’s life.

“Knowing that this dog has been named Chief, which is what people called my father, will now be patrolling the subways and railroads fighting terrorism. This means a lot to this family,” said Michael Stack, 44, his son and a firefighter with Ladder 176 in Brownsville, Brooklyn.