NYC may lift the ban on ferrets as pets 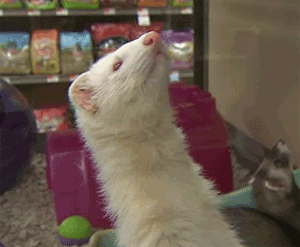 Since 1999 it has been illegal to own a ferret in New York City, but that may soon change.

Ferrets could be making a comeback in the Big Apple.

The furry, four-legged animal — long absent from the city — could weasel its way back into the hearts of New Yorkers based on a petition submitted to the Department of Health asking it to repeal the city’s 15-year ban on ferrets as pets.

The city’s Department of Health and Mental Hygiene said Wednesday that it is considering an amendment to the Health Code.

Ariel Jasper, a Brooklyn College master’s student, said she drafted the petition in January because she has always loved ferrets and wants to correct the current Health Code, which she claims contains many inaccuracies about ferrets.

“I looked into the Health Code and I saw that they were labeled as wild, dangerous animals, and that confused me because ferrets have been domesticated for over 2,000 years,” Jasper told CNN. “They were actually domesticated before the cat,” Jasper said.

Owning a ferret is legal in 48 states, including in the remainder of New York state, she added.

Jasper said that as part of her petition, she recommended mandatory rabies vaccinations for the animals, spaying and neutering, leash laws, as well as micro-chipping requirements so that they can be tracked if anyone gets rid of them.

Many of our pet sitters have experience caring for ferrets and other exotic pets. So if you need a pet sitter for your exotic pet, please give us a call.