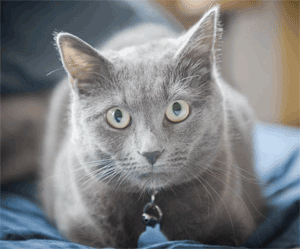 Even cats could use a little therapy.

Lately the headlines have been littered with fickle felines, like the Portland case where a family called 911 on their 22-pound puss, Lux, after the hissy Himalayan trapped them in a bedroom.

“Cats don’t like being dictated to,” says Wilbourne, “and people don’t know what to do with them.”

The New York City Economic Development Corporation estimates there are 500,000 house cats in the city, and being cooped up in apartments all day while their owners are working can lead to all sorts of antics.

“Apartment owners turn to cats because they’re more independent than dogs,” Wilbourne says. “They think, ‘Oh, I can go away for three days, and all I have to do is put food down,’ which is insane.”

Lonely cats suffering what she calls “single cat syndrome” tend to poop outside the litter box, claw furniture and act aggressively because they’re stressed from being alone. Introducing a second cat (Wilbourne does “cat introductions” to help you find the purr-fect mate, of course) can solve many of these problems.