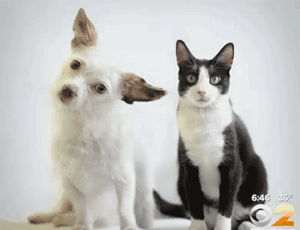 A photographer from New Zealand has photographed New York City dogs and cats for a new book intended to help homeless NYC pets.

A photographer from New Zealand is using her photography to help dogs and cats living in shelters.

Felix the cat and Miracle the dog became best friends at the Humane Society of New York. The two were adopted together about a month ago into the same home, but returned to the shelter to pose for a photo shoot to help tell their success story.

Photographer Rachael Hale McKenna took the shots for her new book, “The New York Dog,” which is filled with pictures of more than 100 pooches from the five boroughs, many of them rescues.

McKenna chose the Humane Society to receive part of the proceeds of her book after being blown-away by the passion of these animal lovers.

“The hardest working, most animal loving and just so dedicated to be working with the animals and making sure they get the perfect homes,” she told CBS 2′s Cindy Hsu.